Last updated on 3 months ago
Sort By: Oldest
Track threadPrint

Grumpy
Posted 3 months ago
#1
Well into China now, and the general course swings to the north-north-east.
Nor-nor-East, steady as she goes, Aye, aye, cap'n.

I have restarted. for the umpteenth time, the Richard Bolitho books, Sailing ships, set during the Napoleonic wars, and the American revolution.
Fascination, Wooden ships and Iron men, Hearts of oak, etc.
Written in the style of C.S. Forester and the Hornblower stories.


However, on with the flight.
Starting at ZGZJ and on to VHHH Honk konk!!

Time to load PlanG and create some more legs.
As many legs as a centipede.

For Raymond and Perry
The rusty gizmo underneath the dish as a Disc Rotator, needs 12VDC.
The arm sticking out has the LNB attached at the focal point.
This dish is set to point to the sky (Where satellites live) but I can lower the angle to the horizontal if i want. 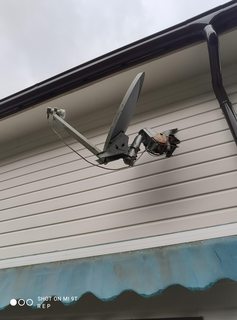